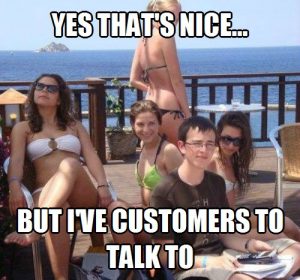 On May 1st I launched a new product, WPSimulator.com

It was the most problematic launch I've ever had, including the server being down for several hours, and yet after 48 hours we'd still had only 1 refund.

One of the most important things with a launch is not just being properly prepared before hand, but paying attention to what's happening and being ready to respond to any problems.

Within an hour of going live I spotted that there were no new members registered in the membership database, this was after 100 sales.

So I then went to the support desk to check for the support tickets that I was expecting and discovered there weren't any.

Then the server went down for the first time.

At this point it would be easy to panic, but that doesn't solve problems.

So what did we do?

First we got the webshost to get the server back up and work out why the server had gone down.

Second I checked in to why people were unable to open support tickets, found the problem and solved it.

Third I re-checked the registration process and worked out why it was failing and fixed that.

Having got things back up and running it was time to get in touch with all the new cusotmers and let them know what was going on.

Fortunately even though they hadn't been able to register in our membership area, all their email addresses were available in our JVZoo control panel (thanks JVZoo!), so I grabbed all the customers emails and sent an email to each and every one of them, letting them know firstly what had happened, and second how to get registered so they could access their new membership.

unfortunatley the problems weren't over, the advice from the webhost was that we needed a bigger better server, even though we had only recently upgraded to a bigger "cloud" server than the 6 year old server that had not failed us for previous launches with similar traffic.

They assured us that the process of "resizing" the server would cause minimal downtime (15-20 mins), they were wrong, it took over 2 hours...

and yes, I'm in ongoing discussions with the webhost company in question to resolve exactly what went wrong and why.

We did eventually get the blog back up and running and went on to have a pretty succesful launch, getting our second JVZoo "Product of the Day" award.

The result for us is that we've updated our "To Do" list for future launches to include double checking a bunch of things, like the signup process and support desk, rather than just checking it once.

But I think the most important 'takeway' from this is that keeping your customer's in the loop and up to date as to what's going on is paramount!

It's when people feel like they've been left in the dark or ignored that problems arise and escalate.